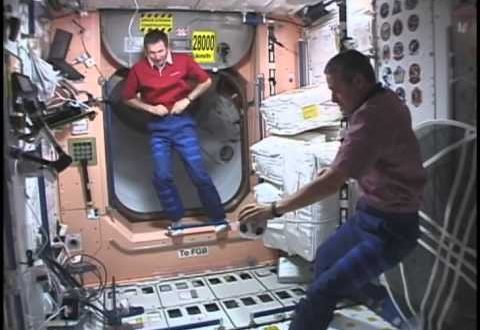 WHICH GAMES HAVE ALREADY BEEN TESTED IN SPACE?

From soccer to lacrosse to hockey, astronauts in space have already been testing out their astrolete skills!

SOCCER
Cosmonauts Sergi Treschev and cosmonaut Valery Korzun discover they must change the way they play soccer because of the effects of microgravity. They quickly adapt to accommodate for the increased difficulty of playing the sport in space. Astronaut Peggy Whitson narrates the video.

HOCKEY
Cosmonauts Sergi Treschev and Valery Korzun discover ways to adapt the game of hockey while trying to overcome the challenges of playing the game in microgravity. Astronaut Peggy Whitson narrates the video.

DENSITY WAND
Astronaut Peggy Whitson investigates how a liquid-filled toy with particles of different density inside performs in a microgravity environment. Whitson narrates the video.

OTHER TOYS IN SPACE
In this educational video from the ‘Liftoff to Learning’ series, astronauts from the STS-54 Mission (Mario Runco, John Casper, Don McMonagle, Susan Helms, and Greg Harbaugh) explain how microgravity and weightlessness in space affects motion by using both mechanical and nonmechanical toys (gravitrons, slinkys, dart boards, magnetic marbles, and others). The gravitational effects on rotation, force, acceleration, magnetism, magnetic fields, center of axis, and velocity are actively demonstrated using these toys through experiments onboard the STS-54 Mission flight as a part of their spaceborne experiment payload.